Santa Monica Airport To Close In 2028

Santa Monica Airport To Close In 2028

After decades of legal battles between the City of Santa Monica and the Federal Aviation Administration, a settlement agreement has finally been reached to close the Santa Monica Airport in 2028 and immediately shorten the runway to limit jet flights.  The airport will likely be replaced by a proposed park, recreational facilities, and potentially other commercial uses.

More recently, the airport has operated as a “reliever airport”, with some of the most stringent noise ordinances and curfew hours in the nation.  The “Observation Deck” and nearby restaurants serve as popular attractions where visitors can enjoy a clear view of airplanes taking off and landing. 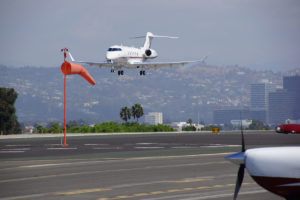 The City of Santa Monica and many of its residents have objected to the continued operation of the Santa Monica Airport, citing noise and air pollution as reasons to close the airport.  The city has initiated several lawsuits attempting to shut down and/or limit the airport’s operations.  In 2014, the city sued the FAA challenging the constitutionality of of a 1948 agreement that transferred ownership of the property and its 5,000-foot runway from the federal government back to the city after World War II on the condition it remain an airport.  In response to the lawsuits, the FAA has stated that the airport must stay open at least until 2023, if not into perpetuity.

This past Saturday, January 28, the City of Santa Monica and FAA finally reached an agreement to shut down the airport in 2028 and immediately shorten the runway.  The agreement ensures that control of the 227-acre airport will be returned to the city and its residents.  The runway will also be immediately shortened from 4,973 feet to 3,500 feet, which will substantially reduce jet and charter operations.

Responses to the news have been mixed.  Some residents are excited about the closure and the potential for new park space.  Others are concerned that the agreement ensures that the airport will remain for another 12 years, and that closing the airport will result in the construction of high-rises in the surrounding area.

Amir A. Torkamani is a born and raised Los Angeles native. He has lived in the South Bay, Hollywood, Downtown, and Santa Monica. Amir graduated from U.C. Berkeley in 2005 with degrees in Political Science and Business Administration. In 2008, he graduated from the USC Gould School of Law. Before forming Esquire Real Estate Brokerage, Inc., Amir worked at law firms servicing numerous Fortune 500 companies in a wide array of matters, including real estate law. Since then, he has represented clients in a variety of real estate transactions throughout the Los Angeles area. BRE #01902191.