Porter Ranch has become one of the most desirable areas of the San Fernando Valley for families looking for excellent schools and a suburban lifestyle outside of LA.  Recently, however, a methane gas leak has given residents and potential buyers cause for concern.  In this article, we discuss the Porter Ranch area, the cause and outcome of the methane gas leak, and the resulting impact on real estate in the area.

Porter Ranch, named after one of the original owners of the land, Ben Porter, is an affluent area in the northwest region of the San Fernando Valley, bordered by Granada Hills on the east and Northridge to the south.

Porter Ranch is one of the last parts of the San Fernando Valley to be developed. Most recently, new home developments were constructed in the 1990s-2000s, over the objections of existing residents.  Since then, the area has gained increased popularity, and developers continue to invest in new developments and homes in the area.

As of the census conducted in 2008, the population of Porter Ranch was approximately 30,000.  One of the driving factors behind the continually increasing population of Porter Ranch is its highly ranked schools, including Castlebay Lane Charter School, Robert Frost Middle School, and Granada Hills Charter High School.  It also is one of the least densely populated areas of Los Angeles County, making it attractive for homeowners looking for a suburban environment. 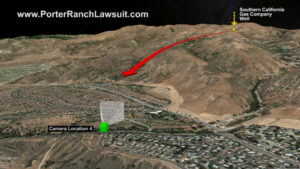 On October 23, 2015, Southern California Gas Company discovered a leak in a well at the Aliso Canyon natural gas storage facility, located about one mile north of Porter Ranch.  The leak, originating from pressurized gas stored in an underground reservoir, was calculated to spew 110,000 pounds of methane into the environment per hour.  In response, the Los Angeles County Department of Health ordered that the Southern California Gas Company pay for the relocation of thousands of families from the Porter Ranch area.  The Federal Aviation Industry also established a no-fly zone over the leak site until March of 2016.  On December 15, 2015, Los Angeles County declared a state of emergency and closed two schools in the area.  The leak was ultimately plugged on February 18, 2016, according to state officials.

As a result of the gas leak, the Los Angeles County District Attorney’s office initiated criminal proceedings against Southern California Gas Company, alleging it had failed to immediately notify the California Office of Emergency Services and Los Angeles County Fire Department of the leak.  The matter was ultimately settled, resulting in So. Cal. Gas Co. paying $4 million, and agreeing to a host of other security measures to be implemented, as reported by the Los Angeles Times.   The settlement did not, however, dispose of hundreds of civil lawsuits that were filed by the residents of Porter Ranch, alleging monetary damages, damage to their health, and reduction in the value of their real estate.

Given the data, there appears to be some truth to the claim of Porter Ranch residents that the methane leak caused a reduction in property values, at least temporarily.  As shown below, the average price per square foot of single family homes in Porter Ranch prior to October of 2015 was generally trending consistently with LA County and the surrounding Granada Hills and Northrdige areas.  The month of October of 2015 saw a sharp decline, and since then prices have only began to recover recently. 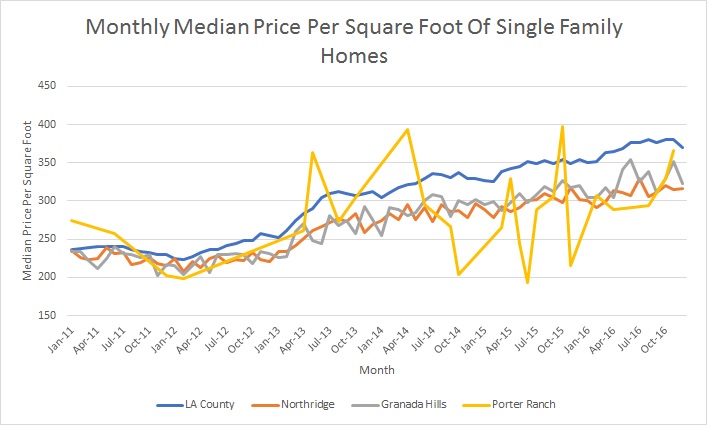 It should be noted, however, that the difficulty with this analysis is that Porter Ranch is a relatively small area, and so many of the data points are representative of only a single sale in the area.  As a result, while the average price per square foot appears to have dropped in Porter Ranch in October 2014 and May 2015, those were actually months in which there was a single sale of a home in need of repair, thereby resulting in a lower price per square foot.  The significant different in those months, as opposed to post October 2015, is that the data indicates a quick rebound due to stronger sales in the immediately following months.  Conversely, in October 2015 there is a similar sharp decline, but the following months consistently reflect a lower price per square foot than the preceding months.  Thus, it does appear that the methane gas leak had at least a short-term impact on real estate prices in the area.

Nonetheless, even after October of 2015 the trend in Porter Ranch continues to be upward.  Indeed, many Los Angeles residents have already forgotten about the methane gas leak, and in July of 2016 the Los Angeles Times reported that Porter Ranch was already regaining its footing only four months after the leak had been sealed.  With time, that trend will surely continue, and Porter Ranch promises to continue to be a suburban oasis in the San Fernando Valley.

Amir is a born and raised Los Angeles native. He has lived in the South Bay, Hollywood, Downtown, and Santa Monica. Amir graduated from U.C. Berkeley in 2005 with degrees in Political Science and Business Administration. In 2008, he graduated from the USC Gould School of Law. Before forming Esquire Real Estate Brokerage, Inc., Amir worked at law firms servicing numerous Fortune 500 companies in a wide array of matters, including real estate law. Since then, he has represented clients in a variety of real estate transactions throughout the Los Angeles area. BRE #01902191.