Is Now A Good Time To Buy / Sell A House In Los Angeles?

Let’s cut through the pleasantries and get to the unfortunate truth – nobody really knows the answer to the question “is now a good time to buy or sell my home”.  This remains true regardless of when “now” is.  Any person who answers the question with a straightforward “yes” or “no” is (a) uninformed and/or (b) lying.  If someone tells you now is the time to buy, ask them whether they have any savings and, if so, why haven’t they dumped it all into real estate?  If someone tells you now is the time to sell, ask them whether they own any real estate and, if so, why haven’t they sold?  The true answer is that anybody who knows with any degree of certainty the answer to whether now is the time to buy/sell would already be a millionaire, if not a billionaire, by following their own advice.  Unfortunately, the truth is that nobody can tell you the correct answer with certainty.

Despite the above, there are economic indicators that can assist with predicting market trends based on historical figures.  The following, for example, is a graph showing the monthly median sale price of existing detached homes since January of 1990, compared to the monthly average interest rate on a 30-year fixed interest rate loan during that same time period.  Generally, these are the two most important factors for purchasers of homes: (1) what is the purchase price, and (2) how much will it cost to borrow money to pay for the home:

At first glance, there appears to be very little correlation between interest rates and median sale prices.  It looks as if interest rates have steadily decreased over time, while sale prices have fluctuated.  However, focusing on the post-recession portion of the graph, i.e. after approximately July of 2007, the average interest rate dropped at significantly faster rate than pre-recession, as did the median sale price.  As the housing market stabilized and began to grow in late 2011/early 2012, the average interest rate similarly began to increase.  In order to avoid a second housing bubble, and subsequent burst, one can reasonably expect that average interest rates will continue to steadily increase and eventually stabilize between 6 and 8 percent, pre-recession rates, in order to temper unsustainable increases in home values.

Sell in the Summer, Buy in the Spring 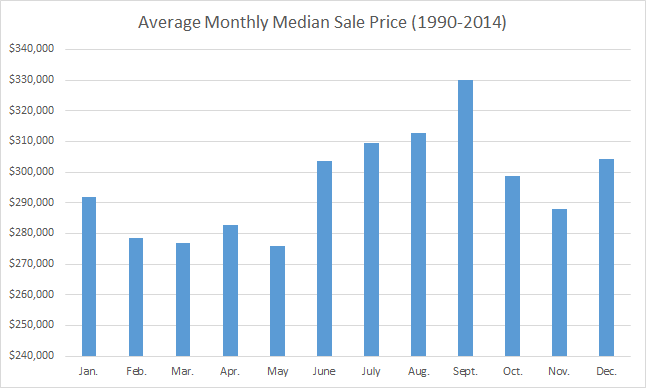 This, of course, begs the question: why?  The answer is simple: school.  As shown above, prices sharply increase in June of each year and steadily increase through September, after which there is a sharp decline.  This is likely attributable to the fact that the Los Angeles Unified School District’s summer break, as with many other school districts, traditionally starts in June and ends in September.  Parents are largely unwilling to displace their children during the school year, so they purchase homes and move during the summer months.  Outside of those summer months, the only other time of the year when children have a significant amount of time off of school is December for winter break, which, not coincidentally, has the next highest average median sale price. Thus, an informed, prudent buyer will buy during late winter and spring, while a savvy seller will hold off on selling until the summer months.

What Have We Learned?

The simple answer to the question is that it is impossible to predict the future, and therefore it is impossible to give a definitive answer.  The trend appears to show that prices will increase, as will interest rates, so now is probably the time to take advantage of low interest rates by purchasing or refinancing.  This, of course, assumes the absence of any significant externalities, such as another collapse in the economy.  What is certain, though, is that sellers are significantly better off selling their homes during the summer, while patient buyers will do better by waiting until the spring.

Six Tips For First Time Home BuyersWho We Are, What We Do, How We Do It, and Why We Do It

Amir A. Torkamani is a born and raised Los Angeles native. He has lived in the South Bay, Hollywood, Downtown, and Santa Monica. Amir graduated from U.C. Berkeley in 2005 with degrees in Political Science and Business Administration. In 2008, he graduated from the USC Gould School of Law. Before forming Esquire Real Estate Brokerage, Inc., Amir worked at law firms servicing numerous Fortune 500 companies in a wide array of matters, including real estate law. Since then, he has represented clients in a variety of real estate transactions throughout the Los Angeles area. BRE #01902191.