Donald Trump’s recent election as our next president has many homeowners and buyers wondering what impact it will have on the housing market. While it’s difficult to predict what he will be able to accomplish during his term and the side-effects, it’s helpful to look at historical data to see whether and how past elections have impacted the housing market, if at all. In this article, we compare housing market trends in November and December of non-election years to election years, in an attempt to determine whether there is any noteworthy impact on housing prices.

In attempting to assess the impact of an election on housing prices, we looked specifically at housing prices in November and December since 1979. This of course likely will not capture the long-term impact of a president’s election (i.e. it does not capture the impact of a president on other months of the year), but rather focuses on the immediate effect, if any, on prices. In doing so, we look to the percentage change of median single family home prices from the prior month.

As noted above, November tends to be a slow month in real estate, with price changes from October to November tending to be close to or below 0%. The below chart shows the November percentage change for all years in blue, election years in orange, and corresponding dotted trend lines.

As the linear/trend lines show, the price change in November in election years trends slightly below non-election years. This is likely due in large part to the data from 2008, during which the price change was significantly lower than any other year since 1979. So, while the trend line is lower, it can likely be written off due to the 2008 “outlier”.

In addition to looking at November, it’s also important to look at December for a “full picture” of an election’s immediate impact. This is important primarily because sales in November, i.e. the date when a buyer and seller enter into an agreement, are not always reflected until close of the sale, which often takes place in December. Accordingly, in some ways December is a better indicator of the impact events in November have on housing prices. Once again, the below chart shows data for all years in blue, election years in orange, and corresponding dotted trend lines. 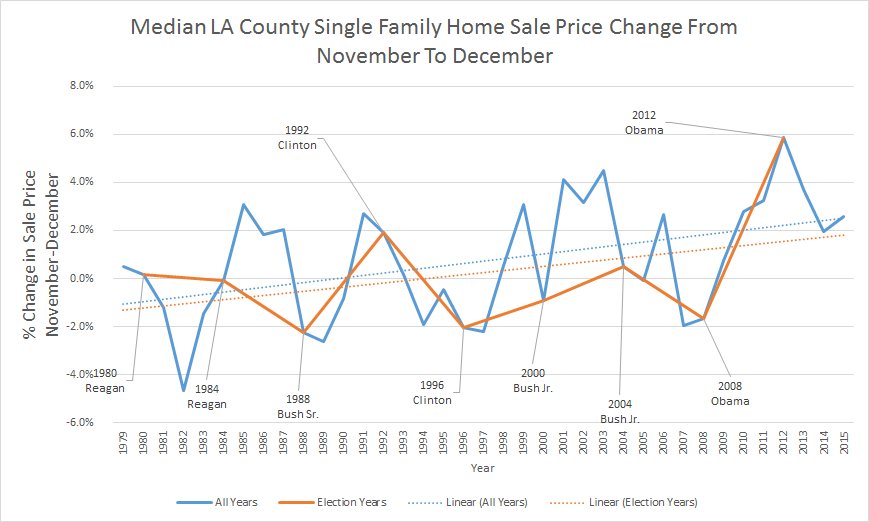 Once again, the data seems to indicate that the percentage change in sale price for election years trends slightly below that of the general trend line. This time, however, the 2008 data is not significantly different from other years, making it difficult to blame the lower trend on the recent recession.

What Does This All Mean?

Of course, this does not necessarily mean that elections are to blame for lower sales prices in November and December. There are a variety of other economic factors that could contribute to the lower trends in November and December of election years. Whatever the reason may be, it is perhaps encouraging for current buyers to see that they may be making a wise decision to buy during this November/December.

If you would liketo further discuss how Esquire Real Estate Brokerage, Inc. can help you in the Los Angeles real estate market, feel free to give us a call at 213-973-9439 or send us an email at info@esquirereb.com