The Los Angeles Expo Line, named after the parallel running Exposition Boulevard, is an electrically powered light-rail line that will eventually connect Santa Monica to Downtown Los Angeles with a commute time of 46 minutes.  The highly anticipated project promises to significantly reduce traffic congestion throughout Los Angeles, particularly along the 10 freeway between Downtown and Santa Monica.  Not surprisingly, it is the result of many, many years of planning, and actually builds on a railroad line that dates all the way back to 1875.

The new expo line is essentially a rebuilding and expansion of the Los Angeles and Independence Railroad that was built in 1875 to ship mining ore from Downtown Los Angeles to ships in the Santa Monica harbor, as well as to accommodate passengers who wanted to spend a day at the beach.  In 1909 the railroad line was released to Pacific Electric, who converted it to electric traction after the Santa Monica harbor closed to shipping traffic.  By 1920, the line ‘s name had changed to the Santa Monica Air Line and served as an electrically powered passenger and freight service between Los Angeles and Santa Monica.  That service was discontinued in 1953, and use of the tracks was fully discontinued in 1988, after which Southern Pacific maintained ownership of the line’s right-of-way.

In 1990, various lobbying organizations supported the passage of Proposition C, which allowed Metro (LACTC) to purchase the entire right-of-way from Southern Pacific, thereby ensuring the line would not be destroyed by the piecemeal sale of its parts.  After several increases in taxes to provide additional funding for public transit, in 2000 Metro released a Major Investment Study to study public transportation options along the Mid-City / Exposition Corridor, which included the revitalization of a passenger line between Santa Monica and Downtown.

Phase I of the Expo Line Extension project began in early 2006 and was completely open to the public by June 20, 2012.  Phase I consists of an 8.6 mile section between Downtown Los Angeles and Culver City.  The system includes 12 stops, three of which are aerial, and also added 5.9 miles of bike lanes.  The westernmost station is in Culver City, which heads directly east to USC and connects to Downtown Los Angeles via the 7th Street / Metro Center.  In July of 2014, the daily ridership on an average weekday was approximately 31,710. 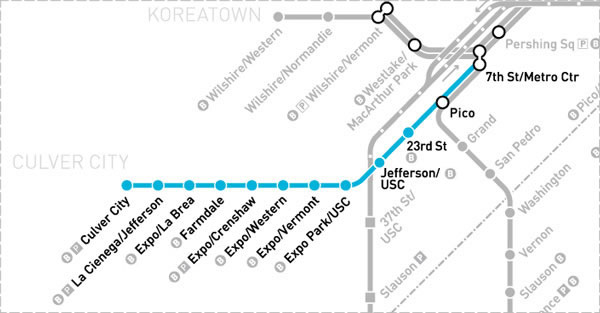 Design and Construction of Phase II of the Expo Line Extension project began in September of 2011 and is expected to be complete in 2015.  Phase II will add seven new stations, the westernmost of which will be in Downtown Santa Monica at 4th Street and Olympic, and the easternmost of which will be in Culver City at Palms Boulevard and the 10 freeway.  That line will of course be connected to the currently existing Expo Line in Culver City.  As of November of last year, Phase II was approximately 80% complete. 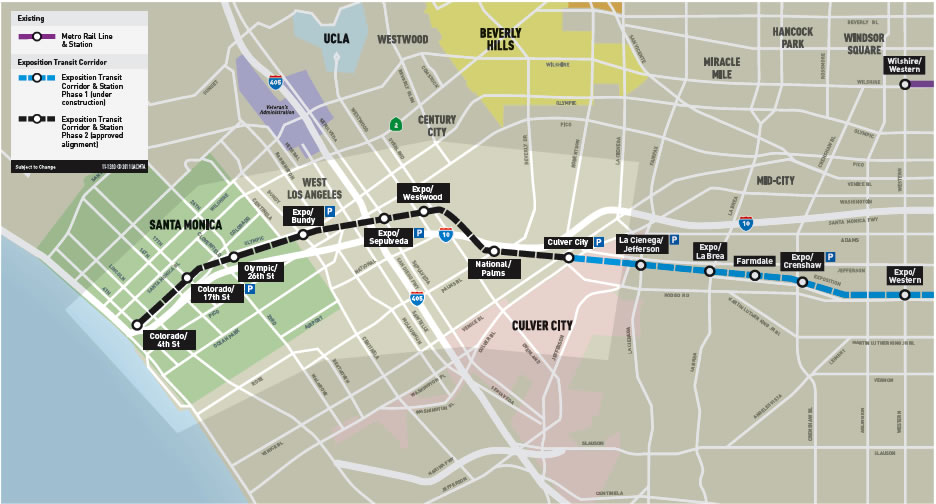 Getting Around On The Expo Line Extension

In addition to the above, the following are some interesting facts concerning the ongoing Expo Line Extension project.

•  Phase II cost is expected to be $1.5 billion.
•  Projected daily ridership from Downtown Los Angeles to Santa Monica is 64,000 by 2030.
•  The Expo Line Extension project includes a public art program, which dedicates .5% of costs to creating original artwork at each station.  Samples of the art that will accompany Phase II are available here.
•  The project also includes a landscaping element, which primarily includes native plants that are drought tolerant and require minimal maintenance.
•  The Expo Board of Directors established an Urban Design Committee in 2006 and a Bikeway Advisory Committee in 2012.  The Urban Design Committee provides input into the visual design of the system, while the Bikeway Advisory Committee provides input on a bikeway that is being designed and constructed in conjunction with Phase II.
•  A study released by USC showed that people living within one half mile of the current Expo Line have reduced their car useage by approximately 40%.

On the whole, the Expo Line Extension project promises substantial benefits to both the economy and LA residents.  The line has already proved to be extremely useful, thus reducing carbon emissions and traffic, and new developments are continuously springing up near both existing and future Expo Line stations.  For Santa Monica residents and commuters, the Expo Line Extension may come as a much-wanted and needed alternative to the heavy 10 freeway traffic.

If you would like to further discuss how Esquire Real Estate Brokerage, Inc. can help you in the Los Angeles real estate market, feel free to give us a call at 213-973-9439 or send us an email at info@esquirereb.com