The area known as East End Long Beach is an often overlooked, quiet, residential sub-region of Long Beach. Located conveniently close to freeways and in between Orange County and Los Angeles, the area has become home to many looking for a more affordable, family-friendly alternative to living in the urban centers of the two big cities.

East End Long Beach is aptly named based on its location on the eastern side of Long Beach, and is comprised of the 90808 and 90815 zip codes. It is bordered, generally, by Lakewood on the north, the Long Beach Airport on the west, Cal State Long Beach on the south, and the 605 Freeway on the east. A map of the East End, including its various sub-regions, is shown below.

Carson Park is an area on the northern edge of East End Long Beach, a portion of which also spills over into Lakewood. It consists largely of small, single family homes built in the early 1950s. The area originally consisted mostly of 2 bedroom or 3 bedroom homes with approximately 1,250 square feet – all of which were accompanied by a two car garage that was attached in the 2 bedroom models and detached in the 3 bedroom models. Since then, many homeowners have added square footage and a fourth bedroom onto the homes. The homes typically sit on lots of approximately 5,000 square feet. The area generally exudes a quiet, residential feel.

Old Lakewood City is a relatively small, rectangular area in the northeast corner of East End Long Beach. It is one of the first-developed tracts around the downtown area northeast of Bellflower, and as a result the homes are slightly older than other surrounding arounds – typically originally built in the late 1930s and early 1940s. Again, the homes were typically built with 2 or 3 bedrooms, but the lots in this area tend to be on the larger side, ranging from approximately 8,500 to 9,500 square feet. As a result, homes in this area have more frequently been developed and expanded, resulting in larger, but older homes.

The South of Conant area in East End Long Beach is similar to Carson Park, but with slightly larger lots. The homes are similar size and were built during the same time period, with lots closer to 6,000 square feet rather than 5,000 square feet. As a result, the streets are slightly more appealing due to the additional spacing between the homes. The western region tends to be subject to slight noise pollution from the bordering Long Beach Airport, but the planes flying to/from the airport tend to be small and quiet.

Stratford Square in East End Long Beach is similar to South of Conant. The primary distinction in this area is its proximity to the 405 freeway, which can in some areas lead to unwanted noise pollution. Otherwise, the homes are a similar size and sit on similarly sized lots.

The Los Altos region of East End Long Beach is the largest of the sub-regions, and as a result has the most variation within the area. The least desirable regions in the area are the southeast portion south of Atherton and the northern region north of the 405, largely due to their small size and noise pollution. The remainder of the area is quiet and residential, and convenient due to its proximity to the Los Altos Shopping Center, located in the middle of the region. Homes in this area typically sit on at least 6,000 square feet of land, often more, and some of the larger, more recently developed homes often sell for over $900,000, making it the most expensive region of East End Long Beach.

The Plaza / Rancho Estates area of East End Long Beach can be divided into two smaller sub-regions. The Rancho area comprises the northeastern square, bordered by El Dorado park on the south and east, and Wardlod Road on the north and North Studebaker Road on the west. Although the Rancho Estates name indicates otherwise, homes in this area are not significantly larger than other homes in East End Long Beach. The area gets its name from the low-pitched roofs on the homes, which are typically built on slab foundations with vaulted ceilings. The Plaza region, on the other hand, consists mostly of homes built in the early 1950s on approximately 5,000 square feet of land. Many of these homes have one-car garages, unlike the other regions of East End Long Beach. The proximity to El Dorado Park and both the 405 and 605 freeways is a significant draw of this region.

Currently, homes in East End Long Beach are, on average, selling in the low $600ks at slightly over $400 per square foot. As shown below, the Los Altos area tends to be the most expensive area, with Lakewood Village generally being the most affordable area. Over the past three years, prices in all regions have been steadily increasing. 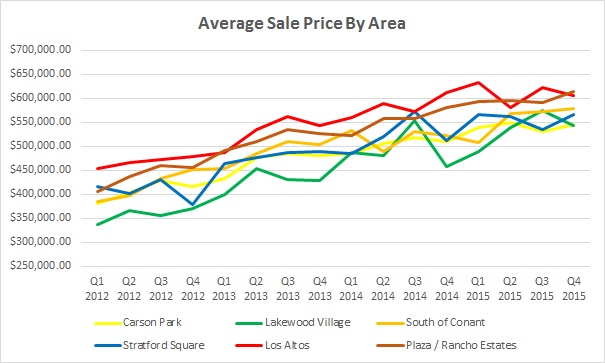 Despite Los Altos being the most expensive area in the region, it is generally not the most expensive on a price per square foot basis. As shown below, that title lies primarily with the Plaza / Rancho Estates region. This is likely explained by the larger size of homes in Los Altos, resulting in a higher overall price, but lower price per square foot. 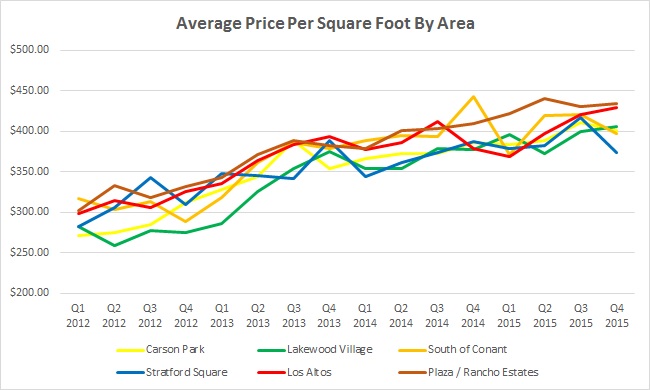 Overall, East End Long Beach shows signs of an extremely healthy housing market, with both absolute prices and price per square foot consistently rising over the past three years. As prices continue to climb, one can expect the area to continue to flourish as homeowners and developers continue to invest in the region.

If you would like to further discuss how Esquire Real Estate Brokerage, Inc. can help you in the East End Long Beach and Los Angeles real estate markets, feel free to give us a call at 213-973-9439 or send us an email at info@esquirereb.com