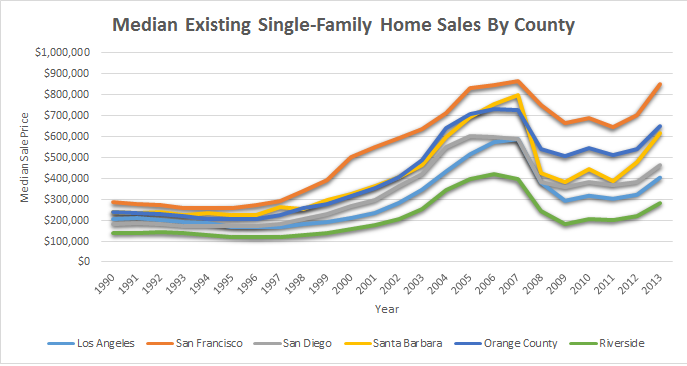 The data also importantly allows us to compare the relative increases and decreases in prices each year in the various markets, including the Los Angeles real estate market.  The below graph charts out the percentage change in median sales price every year since 1990. 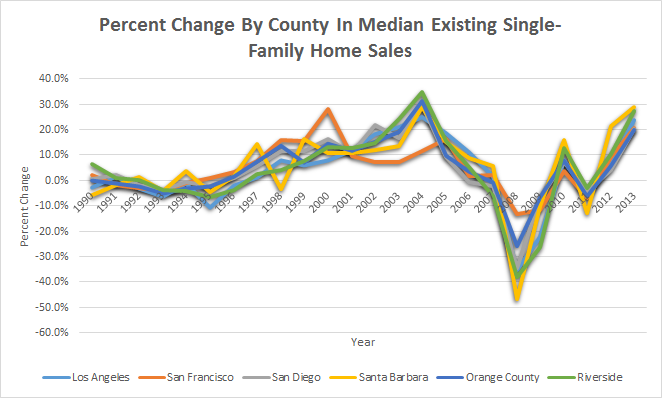 The one stand-out appears to be San Francisco real estate market, while the remaining counties generally followed the same path.  The San Francisco real estate market flourished in the late 90s and 2000 and then it grew slowly until 2007, while the remaining markets grew steadily during the very early 2000s and expanded more quickly during 2002-2004.  The difference is likely attributable to the “dot-com bubble” of 1997-2000, which drew a large, wealthy population to San Francisco’s neighboring Silicon Valley, and that same bubble’s subsequent burst in the early 2000s.  Interestingly, San Francisco also weathered the more recent recession years much more sturdily by dropping only 10-13% annually, while the remaining counties dropped 25-45% in 2008.  This is likely attributable to the fact that its growth had already been tempered by the burst of the dot-com bubble.

California County Comparison – Why Is Los Angeles So Cheap?

Of course, this begs the question of why the Los Angeles real estate market is typically thought to be so expensive, whereas the data shows it is relatively affordable.  The answer likely lies in diversity.  Based on information provided by the US Census Bureau, Los Angeles County is the most populous county in the country with a population of over 10 million.  San Diego and Orange County are the next most populous counties in California, with populations of roughly 3 million.  Thus, the Los Angeles real estate market caters to a much larger and more diverse populous, making its real estate market larger and more diverse than ohers, while the remaining counties cater to more specific markets.

May 11, 2021
Read All Blogs
PrevPreviousTitle Insurance – Only In America
Next$500k In LA – What Can It Buy?Next